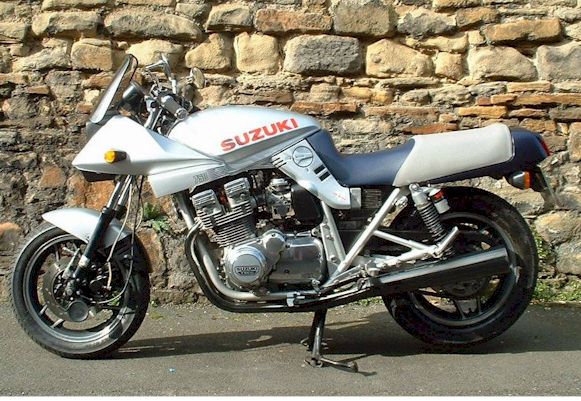 My name is Alan Hedley. I live in England on the Northumberland coast in a village called Amble. I am 49 years old and have been riding motor bikes for 27 of them. I have always been in love with Suzuki Katanas and have previously owned a GS650, GS1000 and GS1100. At the moment I also own a 2002 model Yamaha Fazer which I bought new last May and it has done 7,000 miles - this is my every day transport.

The Suzuki Katana is I believe the GSX750S3 model made for the Japanese home market, slightly different to the UK spec. bikes with a 16" front wheel, different style wheels similar to the 750 pop up Kat and was finished in a champagne metallic color. The bike was registered in 1984 and had only covered 15,000 Kilometres.

I have had the bike sprayed back to the beautiful Katana silver, had the seat recovered and have spent many long hours polishing all the alloy to an almost mirror finish. I have also refinished all the other paintwork on the bike. I have fitted UK spec mirrors and rear indicators. The bike still has the original black chrome 4 into 2 exhaust system.

The only non-standard items are integral indicators fitted into the fairing, the previous owner had done this and butchered the fairing so that I could not refit the standard indicators without major surgery. The indicators I have fitted are in keeping with the style of the bike. I have also fitted chunkier foam grips to try and reduce the tingles through the bars.

My last job was to fit a sit of Hel brake lines and give the bike a full service. The bike had been off the road since the end of last October but fired up first time. The bike is an absolute joy to ride and I love it when it is parked up next to rows of R1's and CBR's. It is still and always will be a head turner.

I would be very proud to have my Kat as bike of the month, I absolutely adore it. If anyone needs further information, drop me a line with your questions.