January 2003 Bike Of The Month 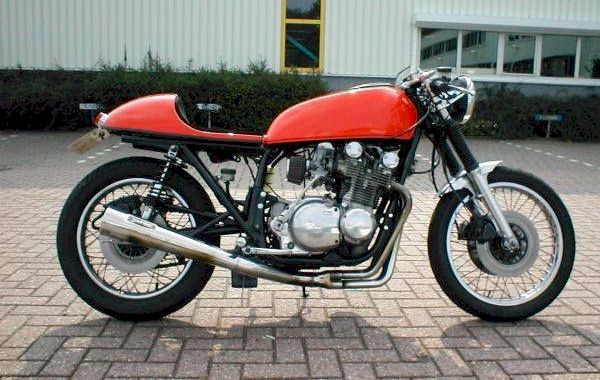 This originally was a 1979 GS750, which I rebuild into a Cafe-Racer style bike - it lost 55 pounds in the process. The engine is basically stock except for bigger jets, individual filters, and a Marshall Deeptone 4 into1 exhaust system. It puts out 61 b.h.p. at the rear wheel, while giving a very nice howl when revved high.

I drilled and polished the engine covers and front forks. I also ground-off the unneeded brackets. The frame was painted, and a VERY orange paint job was done at home...including finish-flag checkers in the middle.

The footrests were backed-up a bit, and chrome clip-on bars were installed. I added rubber gaiters over the front forks, shortened the front fender, and installed Koni adjustable shocks. A replica racing tailpiece was made for my frame width with twin lights built in on an aluminum bracket.

Total cost of the project, including the bike, was around $1,500.