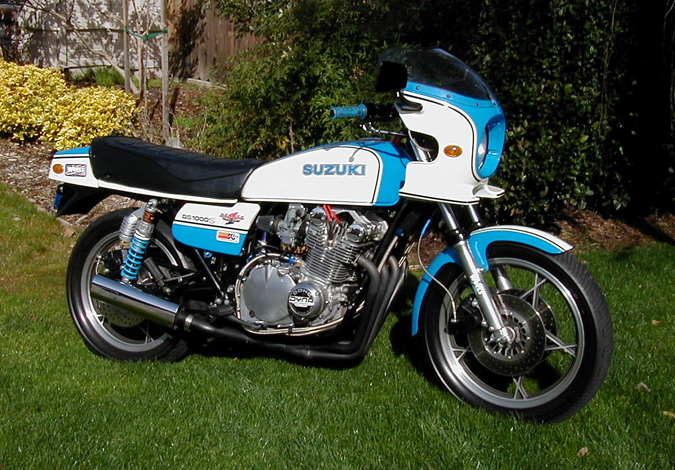 This is my 2nd "S" model. I bought the first one new in '79 when I was in the Air Force stationed in Phoenix, AZ. Along with being my daily ride, it served me well in two seasons of racing in Southern California. I sold it when I got orders to Okinawa - dumbest thing I've ever done.....only cool part was that the drummer for The Tubes bought it!

This one popped-up in Cycle Trader Online Oct. '02. It had considerable corrosion and a number of parts missing, but just 11K miles showing on the odometer, so I just couldn't resist.

My first thought was to try to get it back to stock (collectable) condition, but I knew I was never going to sell it, so I built the bike I wished I could have built back in '79. It took over a year (and almost cost me my 3rd marriage!) to get it this far, but it is obviously well worth it.

To say it's a blast to ride would be an understatement. To paraphrase a quote from the July '79 Cycle Guide test, "After a ride on the GS 1000S, I feel like that big red "S" on the tail piece should be emblazoned across my chest instead !"