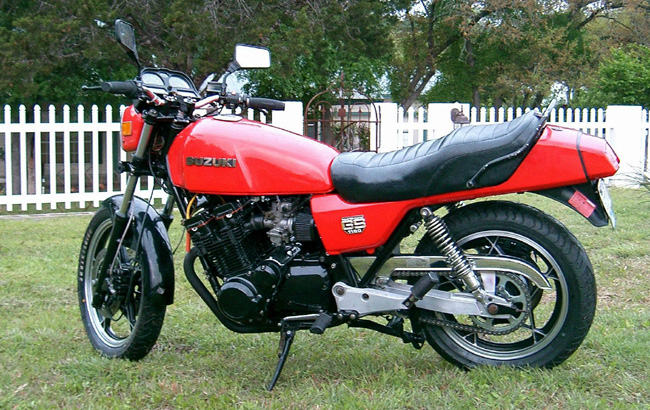 I purchased this motorcycle in 1981 from a dealer in Portsmouth, Virginia when I traded in my 1981 GS750E. I was a 19 year old pup who wanted the power and handling that the 1100 promised. It was originally black with a silver engine.

It has gone through several rebuilds and one three year period of non-use (after a rather severe accident in 1986) and has racked up over 250,000 miles. The most memorable ride was to Durango Colorado in 1985. I rode up there with two close friends and had a great time.

One of my friends, Darren Murphy, was so impressed by the GS1100E, he sold his KZ1000 and purchased a 1983 GS1100E. Unfortunately, Darren died in a Apache helicopter crash in 1989 while serving in Germany. I've tried to locate his 1100 but it has gone to the great salvage yard in the sky.

I have a 1166 kit in the engine with heavy-duty clutch basket, welded crank, 33mm Mikuni smoothbore carbs, 4-into-1 header, K&N pod filters, G-3 cams, and several other modifications put into place over the years.

Good solid performer that still turns heads to this day!