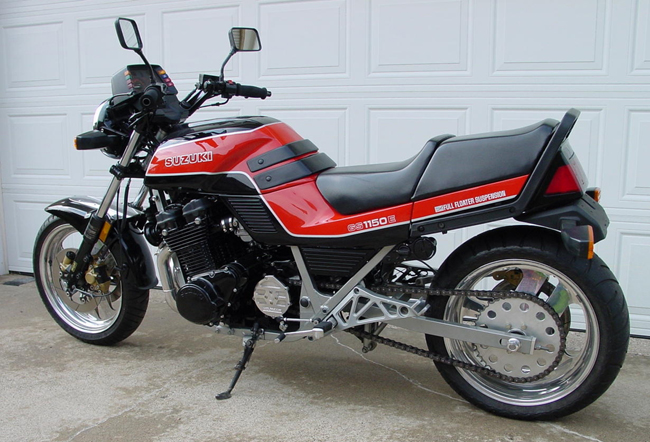 This is my Suzuki GS1150E. I bought it back in 1992. It was hard to find one at the time that wasn't so abused. When I saw it for the first time, it did not have matching colors, but I saw it's potential. The side panels were red and white and the gas tank was blue and white. I knew I had to repaint it but I rode it like this for about 2 years, when I finanally decided to paint it.

I could not decide what color to paint it, so I chose to go with the stock black and red Suzuki paint scheme. I went to the Suzuki dealer and ordered all the stickers for the bodywork ($175, ouch !) and had it painted.

Well, this was not as easy as I thought. I had my parts in boxes for about 7 years. Doing a lot of painting and powder coating as time and money would permit.

Also, I decided to get rid of those wimpy skinny rims. I installed a pair of Performance Machine 17" wheels (Chicane). The rear was extended by four inches using a Trac Dynamics swing arm.

Seven years and $9,000 later, the frame and engine shined as much as the paint job. The handling was so much improved by the wheels and extension of both ends. The power on this monster is also very brutal.

The bike is a little harder to turn now because of the long wheelbase, but in the straight line it feels like it's on rails.