January 2005 Bike Of The Month 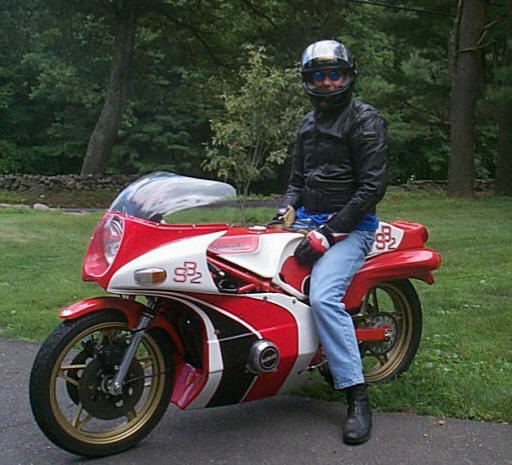 Here is a little history of the Bimota SB2 I took it from various publications, with references. (I also edited it a little) It would be hard for me to describe the bike's features and do a better job than they did. As I am sure you know, this bike uses the Suzuki GS 750 engine and electrical parts for its base. I conclude with my motorcycling experience, and my experiences with the Bimota SB2 thus far.

The Bimota SB2 was the brainchild of Massimo Tamburini. He was the TA in BIMOTA. He was the designer, the engineer, and one of three original founding owners of Bimota. (the other two were Mr. BIanchi and Mr. Morri) The following excerpts were taken from several books and magazine articles.

"It was no easy task to create something really new in motorcycles in 1977. All of the unconventional schemes tested by various private individuals and by companies as well were rejected by the public and by the tracks. The Bimota company, however, based its commercial and racing success on the originality and efficacy of its designs. Late in 1976, a few months after the new four cylinder Suzuki 750 production model appeared, the Bimota company was commissioned to give the Suzuki a new look. Bimota rose to the occasion and developed a unique motorcycle. The Bimota Suzuki was a great success..."
From "Racing Motorcycles" by Luigi Rivola 1977

"Superbike is a curious label first coined in the seventies to describe motorcycles with outstanding qualities... Retrospection shows how much the word was misused, for while the decade produced many motorcycles that seemed super at the time, few were true superbikes. The Suzuki GS750 powered Bimota SB2 was definitely one though. Maybe THE one... The Bimota is a mobile testimony to one small factory's skill, ingenuity and pursuit of perfection. For some , gazing at the SB2 wont be nearly long enough... a true superbike. ...This led to plans for a GS 750 powered roadster, and the SB2 bowed in the January 1977 Bologna show. It was the first Bimota that could be had in either kit form or as a complete motorcycle and demanded a massive - for Bimota - workforce increase from 10 to 30....Its unlikely that the initial plan to build 200 SB2s was fulfilled, probably less than 70 of the 3,800 pound ( $10,000) Bimotas left Rimini."
From "Classic Bike" magazine September 1995

"The SB2s brilliance is more easily understood when you realize that this, the first ever Bimota streetbike, was designed by none other than Massimo Tamburini, the architect of the Ducati 916 and MV Agusta F4 (also the Ducati Paso, Cagiva Mito, Cagiva and Suzuki 500cc GP bikes and of course early Bimotas ). SB2s frame was made of chrome - molybdenum steel... weighing just 22 pounds, and featured conical couplings that enabled the front and rear subframes to be split, allowing rapid engine removal. Steering geometry could be adjusted by rotating eccentric bearings in the yokes. Bold engineering was evident in the rear of the chassis, where the Bimota was among the first road bikes to use a single-shock rear suspension. The swing arm was a long, box-section structure that curved outward to pivot concentric with the final drive sprocket, maintaining constant chain tension. The Bimota weighed 66 pounds less than a standard GS750. Sadly for enthusiasts in 1977 the Bimotas price matched it's performance and exotic nature all too well. It cost almost as much as three standard GS 750s, with the result than fewer than 70 SB2s were built. All of which only goes to make this, the first and most outrageous Bimota sportster of all, even more special. It's doubtful whether Massimo Tamburini or anyone else has ever created a roadster with quite such a purposeful nature as the SB2. Or one that - in styling, engineering and performance- was so far ahead of its opposition."
From "Superbikes of the Seventies" by Roland Brown 2002

Currently, the bike is totally apart and going through a mild restoration. The engine needs work as does some of the chassis and a re-spray is necessary due to the fact it was re-painted two different times - none of the colors match.

When I purchased the bike it had not been run in a number of years. The bike is number 00036, with a total production of less than 70 bikes - there are four bikes now in the U.S.

My motorcycling experience started when I was a bit older - I was 26 when I bought my first bike-a Moto Guzzi. My interest remains in Italian bikes and racing machines. I have been vintage racing a Yetman framed Ducati 250cc single for 18 years. Currently my street riding is limited to outings to bike meets and local rides, preferring day trips and an occasional overnighter.

I am involved with the "USCRA" U.S. Classic Racing Association, a vintage motorcycle racing club based out of NHIS racetrack in New Hampshire and the "IMOC" Italian Motorcycle Owners Club with our big meet in Sturbridge Massachusetts in Sept. I plan on making at least one of the New England GS rides in '05. For pictures of my bike collection and other interests go here.

I would like to thank the editors of the GSResources for running such a wonderful, clean and informative site- it is certainly one of the best out there. Congratulations and keep up the good work.