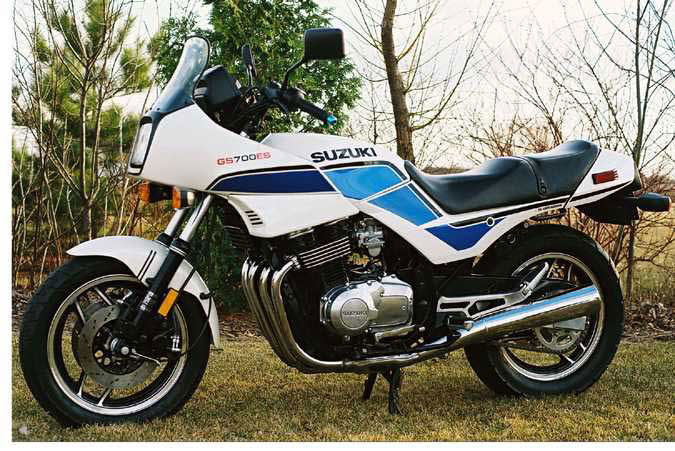 I'm really excited to share my photo with you, and to share what I have done with this bike since I purchased it several years ago from a guy in Chicago.

After purchasing the bike, I became interested in motorcycle shows - specifically, a motorcycle show called "Midwest Cyclemania" that was going to be held in Green Bay, Wisconsin the last weekend in April. I decided to enter my GS700ES in the competition - especially after my brother Mike decided to enter his bike, and after he challenged me to see who could put the most effort into preparing our motorcycles for the show.

I basically removed everything from the bike. For the most part, the only thing left that was still bolted to the frame was the engine.

I touched-up the frame - and as you can see in the photo, I also stripped and polished the engine cases. The Dremel polisher my wife Kelly bought me for Christmas a few years back came in handy, that's for sure.

I spent several hours on each side of each wheel with aluminum polish and sealer. I polished the outside of the carburetors, and buffed every nut and bolt that I could reach with the various attachments from my Dremel toolkit. (I think I started developing a taste for the rouge polishing compound I used !)

I completed the project by hand-polishing every piece of fiberglass and plastic on the bike. The windshield was brought back to near-new condition with Novus polishing compound.

It took me a few weeks just to put everything back together.....but I had a blast doing it. How much fun can an old guy from Wisconsin have working in his garage during the winter ?

I had plenty of competition in the Street / Sport division, and felt that I had little or no chance of winning anything because of all the Ducati and Hayabusa entries - but the judges, and spectators (who also voted) really came-through for me. I was elated, to say the least - especially after hearing comments from the attendees regarding how good my GS700ES looked, considering that it was over 20-years old.

I have personally had a lot of motorcycles "come-and-go" over the last 35 years, but this one I plan to keep forever.

Hope you enjoy the photo.