February 2006 Bike Of The Month 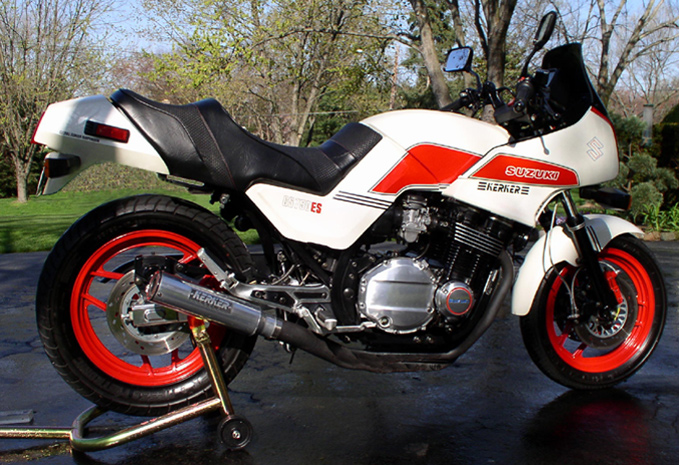 When, in the fall of '82 at the age of 28, I saw Suzuki's new sportbike on the cover of Motorcyclist Magazine, well, it was love at first sight. Of course, everyone else was talking about Honda's groundbreaking "Interceptor" but, for me, the GS750ES was much more attractive. It appealed to me as a simple, but very quick, bike with an air/oil-cooled engine and 16" front wheel.

Prior to delivery, the dealer installed a Kerker K2 exhaust system and the (slightly) lower ES handlebar risers. The carbs were also re-jetted after installing the pipe. All remain on the bike today.
In May '84, I converted the E to an ES by simply replacing the bodywork and installing the ES turn signals (shorter). And with that, I finally had my ES.

Since this was my only motorcycle at the time, I rode it frequently, mostly on backroads... fast. I'm still reminded of the 1964 Schwinn catalog phrase describing its 10-speed bicycles as "designed for brisk road-work." Well, Suzuki could have said the same thing when describing the GSES.

I love the 16" front wheel and peaky engine. I don't care much for the "anti-dive" and braided steel brake lines were installed to mitigate some front brake "mushiness." The wheels were power-coated (red) in 1989 and both a Corbin "Gunfighter" saddle and Progressive fork springs were added in 1991. No modifications have been made since but it is meticulously maintained.

In 1992, with the addition of a Harley Softail, the ES was somewhat ignored. However, since adding more bikes to the "fleet," I've re-discovered the ES. With it's quick steering, awesome sound, and comfortable (yet sporting) riding position, it's an absolute joy to ride.