November 2007 Bike Of The Month 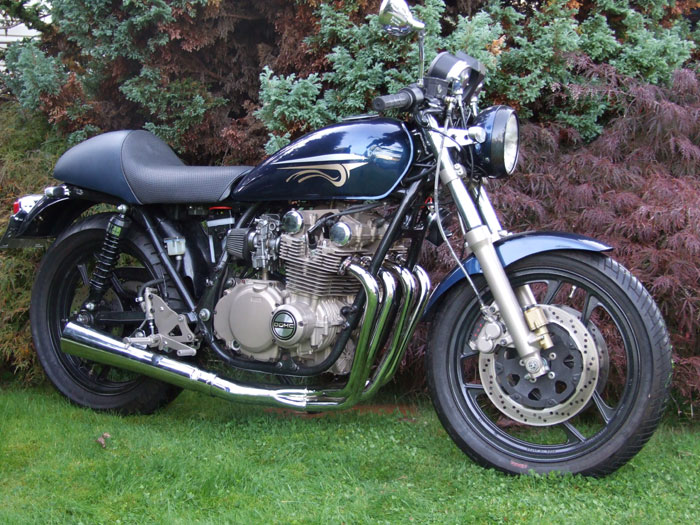 I am submitting a photo to you of my GS550 to see if it might make the GS Resources bike of the month feature.

It all started one day when my brother-in-law asked me if I wanted his old 1981 GS550 for free as he knew that I liked to fix up and restore old motorcycles. I politely declined his offer as I knew that the bike had been sitting in the field at the back of his house for over 10 years and was virtually destroyed with rust and corrosion. However, my wife told me that I should take it and fix it even though I told her that I would make it a custom project that in the end would never be worth the amount of money I spent to make it. But she said to go ahead and so one day this incredibly shot motorcycle ended up in my garage.

First job was to disassemble it and throw away everything that was too far gone or I had no use for. The goal was to turn the 550 into my vision of the perfect cafe racer; small, light and spartan. In the end I got rid of more than I kept. Even the motor had to go as it was just too far gone to save. Same for the seat base, carbs and tank. I took a hack saw to the frame and removed every bit of metal that wasn't absolutely necessary to the bike.

I modified the battery box to set it inside the frame where the airbox was, modified the swingarm to suit the wider wheel and tire that were going to go on. I replaced the front end, brakes and wheels with parts from a 1986 GSXR 1100. The engine is a mix of a GS550 bottom end, a bored out GS650 top end and Mikuni flat-slide carbs off a late 80's GSXR 750. The rear-sets are from a 1989 GSXR 750, the rear shocks from Progressive Suspension, Mac 4into1 pipes and the mirrors from a Yamaha Virago. Steel braided brake lines, custom seat, custom paint and powdercoating are just some of the other things I did.

The engine, forks, rear-sets and clip-ons are powdercoated titanium. The frame, swingarm, wheels and headlight nacelle are powdercoated rainbow. Rainbow looks black until sunshine or headlights hit it and then it explodes with color. It's full of millions of little prisms that refract the light in 26 different colors which is especially cool when you watch the wheels turn.

From the beginning I knew that it was going to be questionable if the bike would handle good or run nice. Once I got it finished I had the big debut start-up. It not only started right away but there was very little carb jetting needed to fine tune it. And what a sweet bike it has turned out to be. I've owned a lot of bikes over the last few decades but this one may just be the most fun. Super light (395 pounds wet), immensely flickable and far more performance than I had expected it to have (likely due to the old torque based two valve engine and the light weight).

The acceleration off the line is amazing for such an old tech machine. The pipe hangs low but I haven't grounded it yet and it helps to lower the center of gravity. Everywhere I take the bike, I can count on someone coming up to find out what it is and talk about it.

Hope you enjoy the photo.