December 2007 Bike Of The Month 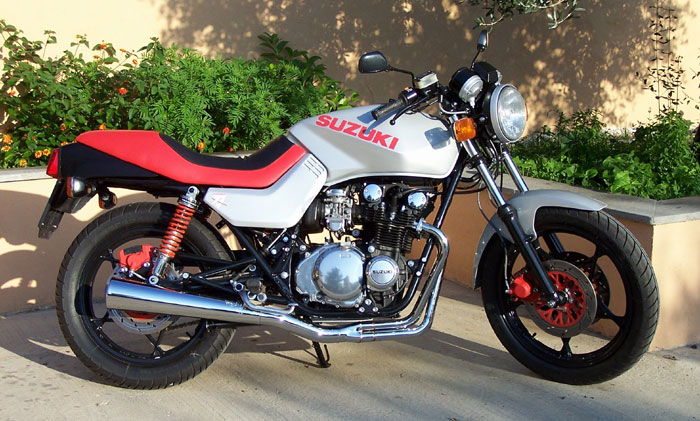 Here is the picture of my 1982 GS 550 M Katana for Bike of the month. I found this bike in 2003 laying in a friend's garage for about 7 years. It had rusted frame, heavily oxidized engine, the tyres were really in poor conditions, the seat was gone and the fuel tank had many dents and scratches (along with some rusted points..)

It didn't seem to be ready to start... however I decided to take the challenge and restore it. After some carbs adjustments, clean up and other minor tunings, the bike surprisingly started and it was ready for the road test.

I started disassembling everything to bring it back to the original state: the engine has been totally restored and black painted (the original was silver but I never really liked that color), same color for the frame, swinging arm and the wheels. New tyres, finally..! Fuel tank, side covers, front fender have been repainted to the original Suzuki bright silver 13L. I had installed a new seat, repainted brake calipers and restored all other stuff to stock. I gave special cares to the engine covers, I polished them to have a distinct contrast with the black crankcase.

The exhaust was very difficult to find, since I was looking for a 4 into 2 system, which seems not so easy to find brand new, and so I took a Marshall 4 into 1 that really stands out with its chrome finish over the black engine.

Well, after 4 years I took this bike to my garage, I still really love it, I love its handling and how it looks. Moreover, here in Italy it is not so common to see a 1982 Katana screaming out on the road!