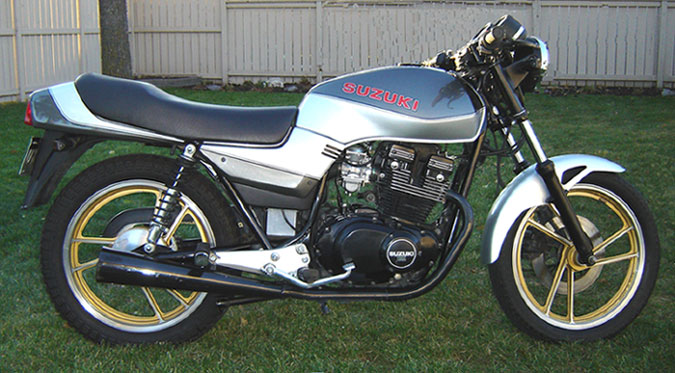 I've been admiring and drooling over your bikes of the month for some time now. This bike is a little smaller and rarer than your usual bikes, as I believe this was a Canada, Europe model only.

My bike is a '85 GS 400S. The bike was originally white with red and blue pinstriping and a mini cafe style fairing. The wheels are the original gold paint. I've had all the bodywork repainted and the seat pan and foam shaved and recovered. Drag bars, smaller turn signals and a bar end mirror were also added to give the bike a cafe racer style.

When I bought the bike (cheap) I thought there was an oil seal leak at the top of the engine as there was years of dried oil caked on the engine and the frame. It turned out to be the tach cable seal so with a lot of cleaning and scrubbing it has turned out like this. The bike runs great. I plan on a few other minor changes in the future.