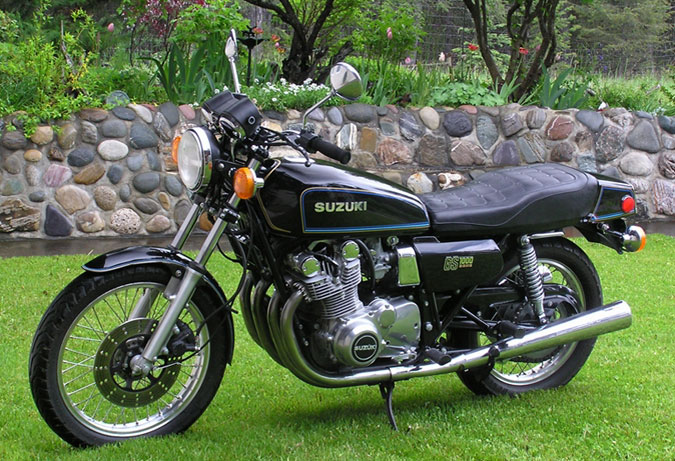 I've been involved with motorcycles for almost 40 years, and since my start in this sport, I've always had a love affair with Suzuki products - most particularly, the versatile GS series and of that series the early flagship the GS1000.

The versatility of the GS line allows owners the option of full touring models, cruisers, the ease of stock restorations or the ability to mix and match parts to produce an incredible array of custom built high performance motorcycles. Many of these have been shown as Bike Of The Month.

I submitted this photo of my 1979 GS1000N because it represents some of that versatility. When I purchased this GS in 1992 it was outfitted with a 4 into 1 pipe, K&N pods and a Wes Cooley fairing. It was pretty outrageous especially at 8,000 rpm, and not really the way I wanted it, so I planned to return it to stock. Being a low mileage survivor, the cosmetics were near perfect, so it would be an easy job. The stock parts were added and the re-jetting of the carbs were done in 2003 and the Wes Cooley fairing remained on the bike.

Disaster struck in 2005 when I tossed the bike down road and destroyed the fairing and dented the gas tank. After surveying the damage, it turned out the fairing took most of the hit along with a slightly dented tank and bent handle bars. The bike actually came through it quite well. Luckily I was able to source a NOS tank, replace the bars and remove the fairing. Now the bike is back to its former glory.