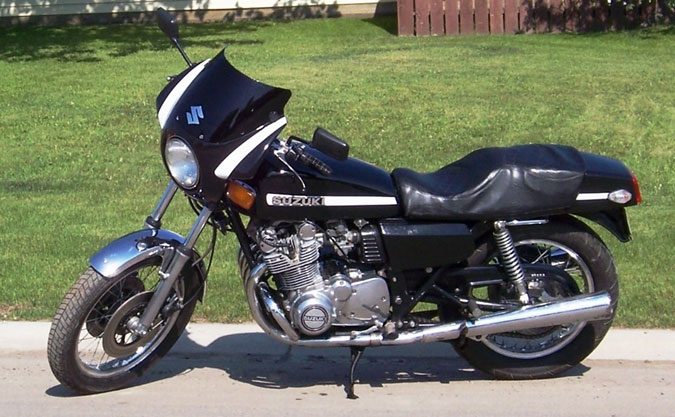 I had always wanted a bike, but priorities dictated that the kid;s food and diapers come first. My family moved out of town for the summer last year, (meaning a longer commute to work,) and had a few dollars, so I started asking around. A friend had two 78 GS1000's sitting in a grain shed. They had been there for 11 years. I was shocked when my friend said I should just take it! I got the other for a song.

The GS Resources were instrumental in helping me get my baby up and running. There's no way I could've fixed all the little things that needed attention without the help of my online community of fellow GS'ers. I put about 6000km's on it last summer without any trips. I rode it almost every day. (The season is way too short up here.)

The bike has undergone a slow evolution to the point it's at now. I set it up at first as a touring setup, with a windshield, cruiser type bars, highway pegs and a luggage rack/sissy bar. It worked well, but it wasn't how I wanted to keep it. I spent quite a few hours tinkering in my basement last winter. It one point I had everything but the frame and engine down there. I modified a GS1150 fairing for a custom cafe fairing. Off came the highway pegs and luggage rack, (I never used them anyway) and a set of Euro handlebars went on. I shaved down the touring seat to give it more of a "superbike" look. Clear flush mounted rear signals replaced the stock ones. Progressive springs went into the forks and it got dual brakes up front. A fresh coat of paint this spring and a lot of elbow grease and I think it looks great. It currently has 60,000km's on the clock. The bulletproof engine is stock. I'm amazed by how versatile this bike is.

My bike turns heads wherever it goes, getting nods of approval from lots of folks that appreciate a classic. There are millions of cruisers and sport bikes out on the roads, but this one is one in a million.