September 2007 Bike Of The Month 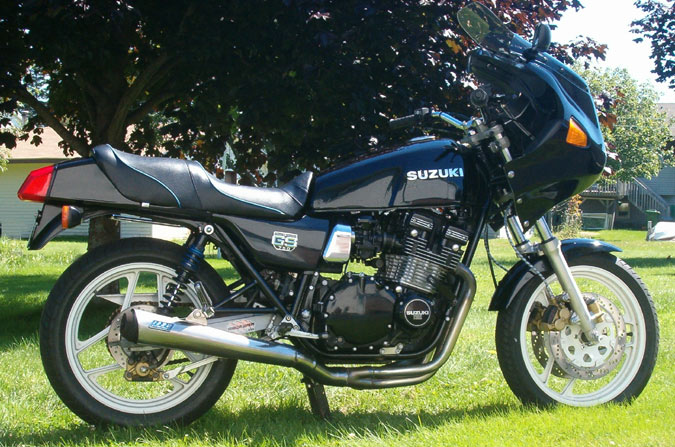 I purchased my shiny new GS 750 in June of 81. I chose a GS based on favorable magazine articles of the day and to date have logged 95000 miles. After 12 years of faithfull service including trips down the dragstrip and a high performance riding school at the local road race track, my well worn GS was overdue for a rebuild.

Bike is now mostly used for sport touring and the folllowing mods have make it better suited for that role.

Bike was stripped down to the frame and mounts for FZ-600 rearset footpegs were welded in. 85 GSXR front end, wheels and brakes. Warmed over 83 1100 katana engine and carbs with K&N filter and supertrapp exhaust.Stock cams degreed for good midrange power. Pichler fairing,low rise handlebar and reshaped seat. Many smaller items were also changed over the years including a ZX-10 front master cylinder to match the GSXR calipers, braided steel brake lines, a GS-1150 handlebar mount choke lever to replace the awkward original, EX-500 mirrors,fox gas shocks, progressive suspension fork springs, 530 chain/sprockets with taller gearing for less buzz on the highway. Mods are low key and it usually takes another GS junkie to spot all the tweaks. My GS has given 26 years of riding pleasure and memories and is still going strong.

While I have been tempted over the years to upgrade to something newer, the ease of engine and chassis parts swapping/modifications, availibility of parts and overall Suzuki reliability has made it an easy choice to stick with a GS Suzuki.

Many thanks to GSResources for providing a forum that encougages continued interest in these now classic bikes.