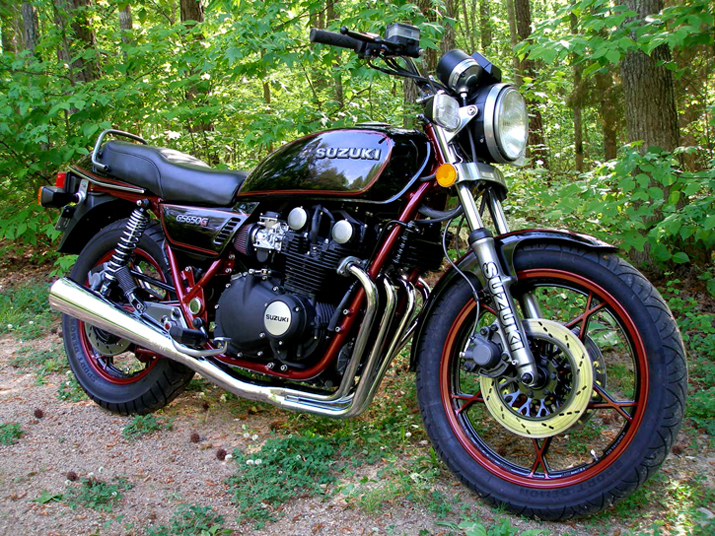 This is my 1981 GS650G. I got the bike in trade for some KZ900 carbs that I had built.....it has been like 9 years since then. I rode the bike off and on for around 7 years and was always bothered by the fact it would jump out of second gear all the time. The bike had over 60k miles on it, and was do for some attention.

So last year I decided I would get into the motor and fix that second gear issue. That's how the total build started..... I got a bad case of the "while I'm in there" syndrome. It was a labor of love and I truly enjoyed bringing this bike back to the state its in now.

Everything on the bike has been gone thru at this point. I powder coated pretty much everything that I could, painted the frame garnet red metallic and the body work 2k urethane black and followed it up with some pin stripping to try and tie the black and the garnet together. The motor has been rebuilt with all new bearings and rings - and fixed the second gear.

The suspension has new progressive shocks in the rear and the forks have been rebuilt with progressive springs. All the wheel, steering stem and swing arm bearings have been replaced. New intakes, rebuilt carbs, and I just installed a Dynojet stage 3 kit with K&N pods. Replaced the rusted out OEM exhaust with a Marshall Deeptone 4 into 1 and put some Pirelli sport demons under it.

I posted the entire build of the bike here on the GS Resources last summer, and got help and advice when ever I needed it. This forum has a great group of guys!! It would be an honor to have my bike grace the home page of the site for a month.