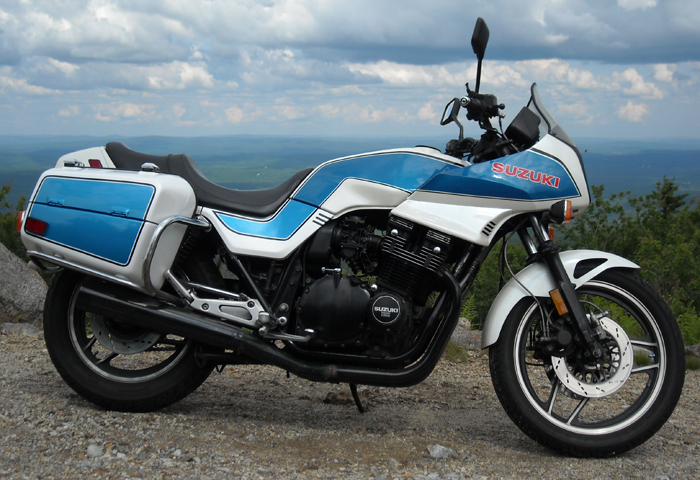 I'm respectfully submitting a couple of pics of my 83 1100ES-k. I say "-k" because I have added a set of GK hard saddlebags, painted to match the ES.

After looking at what seems like hundreds of bag options, and not finding what I wanted - it hit me! GK Bags!

I have 4 decent pics, 2 here and 2 more. It was a cloudy day (June 27) so if you have editing tools to improve the picture, feel free. There is enough detail to see the GSR Moosehead 5th rally tank magnet (where I first met many members in the northeast, and it was my first rally.)

I've ridden nothing but Suzukis since 1982. I bought my first Suzuki in 1982 off the showroom floor - a red 1100E. MAN - what a great bike!! In 1984, I went off to join the Navy and after completing basic training, I found myself in Florida without any transportation (as the E was in my parents garage back in Boston, MA.) I found an 82 1000S for sale locally in FL and bought that. I have ridden that the past 25 years (and still own.) That bike, and that motor with the factory trick mods - is THAT fun to ride! But, reaching for those clip-ons on typcial 300 mile Saturday rides, was getting less comfortable with each passing year, especially with the HD cruisers I normally putt along with. So a few years back, the search began for an 83 ES. I found one - pretty much original - relatively close and bought it. Shortly thereafter, the search began for hard bags. After gathering all the hardware (through the wonderful GSR family), adapting it to the ES frame, paint was the last step (and deciding on the design.) As you can see, I went with the two-tone GK theme - keeping that factory look - if they had the option, which of course, they didn't.

Great site, great people, great family! I don't recall any members adapting GK bags to their 82/83 E family, so this may be a first. And I've never seen an ES set up like this. So, thought it would be an interesting BOM candidate. An ES-k

Sorry it wasn't a better day (for lighting) but the pics are from the peak of Mt Kersage in Warner, NH - elevation 2800 ft. Great view even in less than perfect conditions. I've got my fingers crossed. Let me know if you need any other details. And, if you want to edit the "note from owner" - feel free as there is a lot here. BTW, four times on this outing - strangers walked up asking questions about the ES, but no one asked about the very nice Road King of my riding buddy!