October 2010 Bike Of The Month 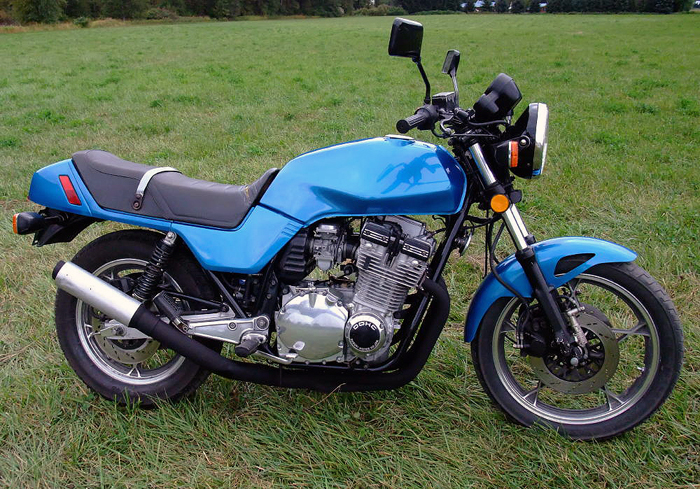 I'd purchased this thing from a fellow who was a bit down and needed some money, he'd just been married and having the first kid.

The bike was in parts, some in boxes but mostly larger components like engine, frame, wheels etc. were attached to something so figuring it out wasn't so tough.

I set about sticking it back together and eventually had a bike, that ran like... not so much!

After replacing the main jets, they looked like Swiss cheese, I was able to fire it up and ride for a year or two. That was about 10 years ago when other things forced the GS into the barn with the other toys.

So last winter with the Olympics driving everyone to distraction I pulled the bike out and set about getting some of the smaller stuff done. Of course that turned into a bit of a mission as there was an oil leak that just had to be staunched, at the case-halves, darn it.

So with the engine out and split through the middle I set about cleaning and painting. The frame is a rattle can job, black, easy, and the aluminum sanded, polished and almost as easy but super satisfying results.

I stitched the whole bike back together then went through a painting saga that, well should try anyone's patience, I mean everyone should try it, once.

Looked good then started it,oh crap, it ran sooo lousy I could cry.

I left on a ride weekend to the top end of Vancouver island with some duel-sport riders and around the campfire found some kindred souls that were doing the same thing with their older GS's and from them the mantra "Just clean the carburetors" was born, I had thought electrics, demons, old girl friends but not the carbs. So from them too, "don't split them up" I set about cleaning them. BANG, that was the trick! I had a tiger by the tail, and super smooth, it had never run so good.

I've ridden it to work through the summer and can't stop loving the engine, the pipe works for me too.

I live 50 Kms from work, in the mountains and get twisters and long straights with no cops(at 4:30 in the morning).

This bike is running like new but since I live on the "Wet coast" I have to put it back in the shed for the winter, knowing it will be fresh for next summer, argh!

I'm having withdrawal as I write this, can I just blink and it be summer again?