November 2010 Bike Of The Month 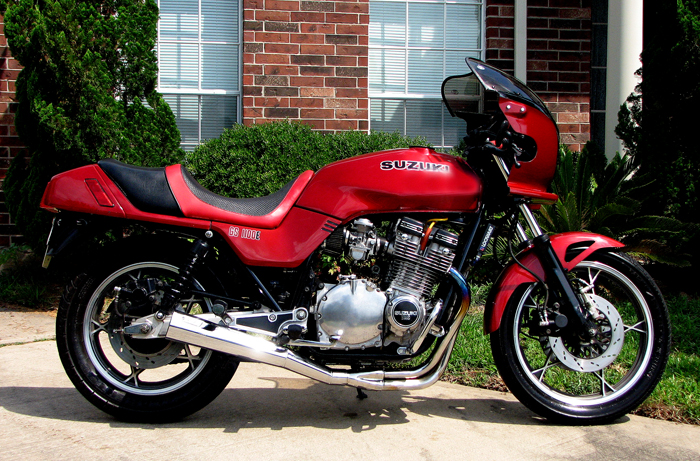 This is my 1982 GS1100EZ, I owned one previously that I purchased new in 1982, same color and everything. Unfortunately in 1988 (if I remember correctly) my original '82 was stolen, the only part recovered was the motor, I sold the motor to a friend of mine at the time who used it for a race bike he had.

A couple years ago a gentleman in Portland Oregon was selling this bike, I am the luckiest guy in the world, knowing how much I enjoyed the original '82 that I had and knowing how much I missed riding it and wanted another, my wife bought this '82 GS1100EZ for me for my birthday and had it shipped from Portland Oregon to our home in Pearland Texas.

Since receiving the new '82, I have made some changes to it like adding the crank case protectors, installing Clubman handlebars, removing the large eye catching turn signals and replacing them with more subtle Eagle Eye turn signals but, the item that I am most proud of is the Wes Cooley fairing that I added, it's something that I always wanted to put onto my original but could not afford it at the time, I was in the military. The reason I'm proud of the fairing is that I had to design and manufacture my own mounts so it forced me to test my abilities. I do also have a Wes Cooley chin scoop that will someday soon be mounted onto the bike but at the present time I just haven't had time to think it through and make it happen, but soon I'll make time to do it.

I ride this bike every chance I get, with the original '82 it was my only form of transportation so needless to say I rode no matter how hot or cold, rain or shine, I even rode the original everyday in the thick pea soup fog in the San Joaquin Valley of California that is so thick that you cannot see a foot in front of you, every four years you hear of the hundred plus vehicle pileup near Fresno that's the stuff I rode in. Now with the new bike I am more picky about the weather, I don't mind the heat and I don't mind the cold but unless I get trapped I don't ride in the rain and thank goodness we don't have fog like that here in Texas.

I just wanted to share my Suzuki with everyone and make everyone jealous who doesn't have a wife as good as mine!

Thank you very much for considering my bike for Bike of the Month,