September 2010 Bike Of The Month 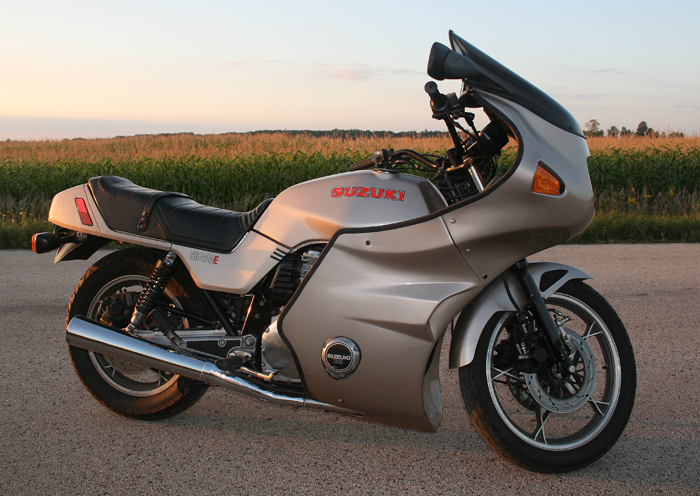 I bought the bike in 1998 in Bellevue, Wisconsin and have not altered it in any fashion.

The fairing is a custom fairing from Germany and works great minus a little windage that hits the top of my head at highway speeds. It has approximately 17k miles on it.

I was attracted to the bike since I had not owned one since 1996 when I sold my GS750EZ in Sturgeon Bay, which I bought new in California and knew inside and out.

It is a wonderful machine and runs great minus a bit of smoke at start-up when it's below 75 degrees outside but it soon ceases and the exhaust gives no odor of oil after a minute or two.

The bike's color (champagne gold) is beautiful and I have a lot of wonderful memories with this machine, including meeting my soon-to-be wife the year I bought it. The fact that she was willing to ride it with me was just one of the ingredients that made her an obvious gift from Jesus Christ, and when I told her before we married that motorcycling was something that I did not foresee ever giving up, she was accepting of that (another blessing).

I have had numerous people over the years, (typically guys in their 20's), tell me my bike looks awesome. I then ask them if they have any idea how old it is which they never get right. They are floored when I tell them it is over 20 years old! This machine always looks young (too bad I can't say the same for myself).

Thanks Mark for the opportunity to be considered for pic of the month.