November 2012 Bike Of The Month 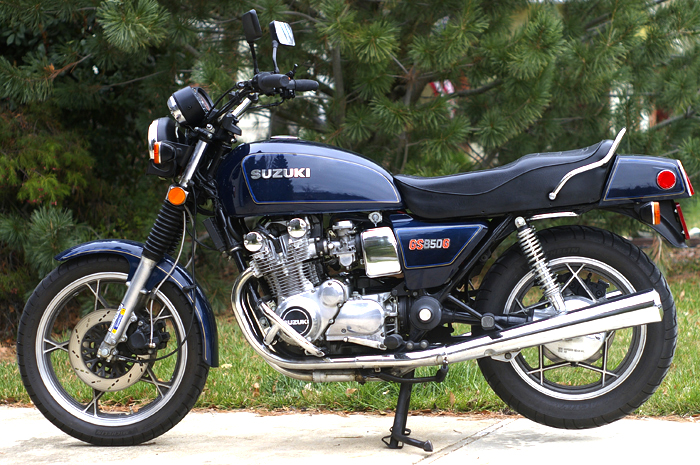 My brother bought the 1981 GS850G new in August '82 at Oceanside Suzuki in CA and he rode it daily until he was transferred to Okinawa for a year in 1986. Unfortunately, and while in storage, a family member moved the Suzuki from the protection of a garage to the outside elements with no cover while he was gone. When my brother retuned he did some restoration work on the Suzuki and later rode it across country from California to Maryland.

While living on the east coast he continued to ride the Suzuki for several more years before purchasing a new touring bike. The Suzuki became a basement project to further restore it before it was eventually shipped off to me in 2011 as a gift. My brother rebuilt the brakes, repaired some of the electronics, replaced miscellaneous rubber pieces, cleaned and lined the gas tank, repaired all the exhaust bolt hole threads with Heli-Coil inserts, cleaned or replaced all parts affected by corrosion and replaced the battery prior to shipping the GS850 to me.

Since I've had it I've cleaned and rebuilt the carburetors and replaced the rubbers pieces; intake holders, air box boots and all carb related O-rings. It also has new tires, clutch and throttle cables, spark plugs and ignition wire caps.

The paint and chrome are all original. Modifications done by my brother include an oil cooler with thermostat, after market horns and fork gaiters. The only problem he's had with the GS850 is the vacuum line coming of the petcock and the petcock leaked at one time and was rebuilt. The trim pieces around the bottom of the seat also broke and fell off at some point. He's used Castrol 10W-40 during the 40,000 miles covered so far and the engine and entire bike are still in fabulous condition.

The engine runs like new and the rest of the bike looks and performs likewise. The Suzuki was always well maintained and other then the time spent outside for about year it's always been in a garage or basement so with the restoration work done it's still in fantastic condition.