February 2014 Bike Of The Month 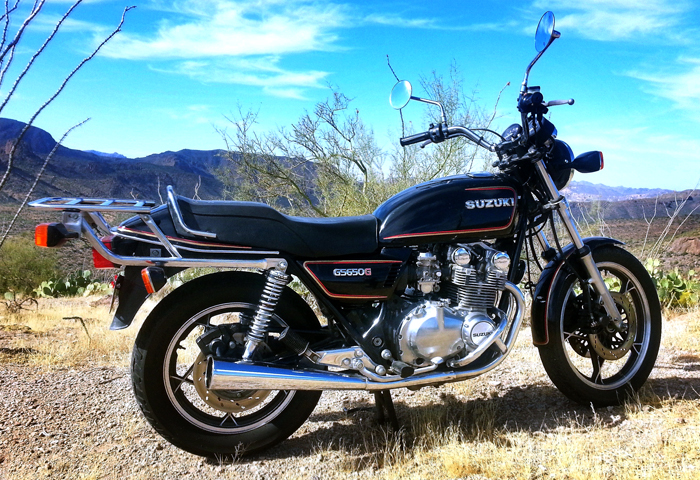 I've attached a few shots of my GS650GT

This bike has been in our family since day one and is now being ridden by my 20 year old son.

My dad bought the bike new. He was paranoid about getting rear-ended so had the dealer install the luggage rack/backrest, then add extra brake lights (orange). He also had the crash bars installed before taking delivery. I left all that on for the life of the bike and now I don't mind it on for my son.

I put most of the 16K miles on it from '81 to '86, my dad rarely rod it. I got other bikes and this one pretty much sat idle for most of the 16 years until now. We obviously had to get the carburetion and intake working correctly as Phoenix requires emission testing on bikes. My son is enjoying motorcycling and this bike is perfect for a beginner. I still think it has the most comfortable seat of any of the 7 bikes I've had since.

The only repair I remember doing was a clutch cable, that broke midway between Phoenix and Boise in ~1988. We did have to replace a few deteriorated parts to getting going again. The bike has never been crashed or dropped, no dents, and only minor scratches.

This picture was taken 10/13 near Tortilla Flats, East of Phoenix.