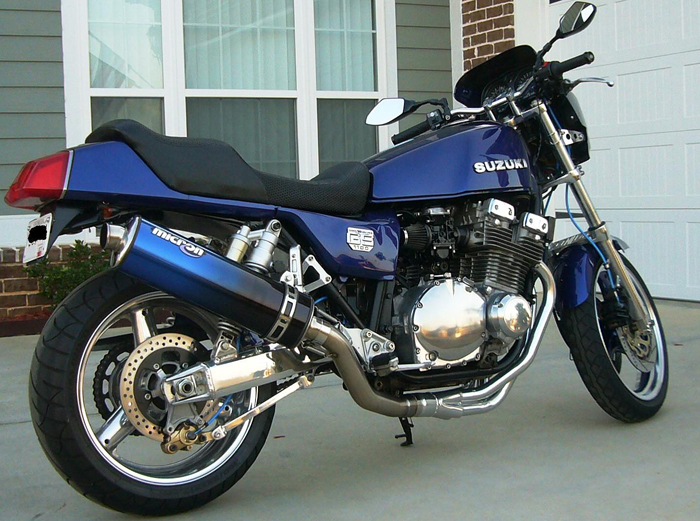 Here is a picture of my 1980 GS1100E, I rescued the bike from a Pennsylvania snow covered front yard in 2000, where it had set for over 3 years in the same spot. To say it was in bad shape would be an understatement. Loving the bike from when I was a kid, flipping through the pages of motorcycle magazines I knew, I had to save it. So after some fast talking, a few dead presidents and a screwdriver to start it, the restoration began, and lasted almost 10 years and saw three different countries.

Begin an US Air Force member this bike has seen a lot. Soon after buying it, it was shipped to England and my uncle Bernie and I started the resurrection. This is where I thought...what if Suzuki were to follow the big three car companies and make a GS 1100 today, what would it look like, that was the look I was going for. Well not far into the build, Suzuki did just that with the GSX1400. Being in England I actually got to see them up close, and that is where the rear end came from. The rear is from a 2001 GSX1400, bought from a Trike dealer at a Bike show in England. My uncle and I quickly realized it needed an updated front end to match the new rear, the front is from a Suzuki Bandit. There were several more modifications made while I was stationed in Germany.

So after many years of trying different upgrades here it is. I have been riding for over 30 years and the GS still runs better than anything I have ever owned and turns more heads. Although I am no Wes Cooley, the dreaming days of flipping through magazines has come to realization.

I would like to say thanks to my wife Deb, and my sons for helping me and putting up with my nights in the garage. And a special thanks to my Uncle Bernie who at over 70 still loves bikes and helped me more than I can ever thank him for.

Thanks for listening and for everything you do to keep these bikes alive.