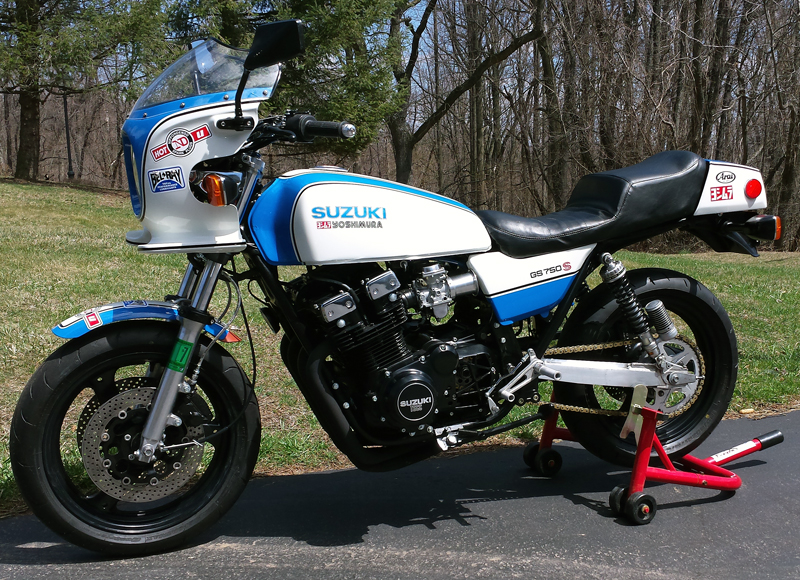 My bike is a 1981 GS750S - Little Wes Cooley Replica: a bike that never existed but probably should have because Suzuki would have sold lots of them! The LWCR started out as a $350 30-year-old, non-running 1981 Suzuki GS750E with surface rust, a missing side cover and serious wiring and carburetion issues. I decided to build a Wes Cooley Replica out of it because I had always liked the look of the blue/white/black factory race bike and had never seen one in person. The build took 3 years and was completed in August, 2014. My goals were to:

2. Improve performance by:
a. Incorporating improved technology.
b. Making it lighter.

The original, ugly, square headlight was replaced with a GS850 unit, which allowed fitment of a stock fiberglass GS1000S fairing with new windshield. The original front fender was cut down and has a rubber mud flap on the back. The gas tank is original, with a rebuilt petcock, a working fuel gauge and custom decals. The stock seat was cut down to match the race bike and has a new custom vinyl cover and gel insert. The tail section is a 1978 GS850 unit, which more closely mimics the one on the GS1000S. The rear fender was bobbed by 3-4 inches to just reach the bottom of the license plate.

The aluminum, box-section swingarm was sourced from a Suzuki GS1100E and rides on new bearings and a custom-made pivot bolt that was shortened to clear the ultra-cool Tarozzi aluminum rear sets. The rear shocks are stock Showa units from a 1983 Honda CB1100F and are adjustable for preload, damping and compression. The rear caliper, stay and brake disk are from a 1994 GSX750F. Both the caliper and master were rebuilt and use a braided, stainless steel line.

To reduce weight, final drive was converted from 630 to 530 with a Vortex aluminum rear sprocket, a stainless steel racing front sprocket and a gold RK x-ring chain. Wheels are stock 1994 GSX750F units in 3.50x17 rear and 3.00x17 front and are mounted with Bridgestone HP2s. The stock center stand, mounts and all miscellaneous frame tabs have been removed.

The engine is stock and untouched except for a valve adjustment, new OEM clutch springs and a shimmed oil pressure relief valve (to improve oiling). It has all new gaskets, stainless fasteners everywhere and breathes through the stock, rebuilt and repainted carburetors with custom velocity stacks and a Dynojet Stage 3 jet kit. The exhaust header and mid-pipe are period Bassani, from a GS1100E drag bike, with a SuperTrapp silencer, from which the slash-cut tip was cut off. The LWCR features a new starter relay, regulator/rectifier, Shorai Lithium Ion battery and Dyna high performance ignition coils and wires.

This bike is fun to ride. It is very light and not too loud but with immense power and a comfortable seating position. It would not have been possible without all of the help and parts I received from GS Resources members. I just wish that all forums were as good as this one is because my next project is a 1990 Kawasaki ZR550 and there is not nearly as much help available for that bike!