It was back in the '70's when Honda and Kawasaki basically divided the market for big road-going four-stroke fours. Yamaha was having considerable trouble keeping up, and Suzuki was nonexistent in this market, since they were only offering some fast, but questionable strokers. Oh yes, and a rotary engine bike that gobbled up spark plugs for breakfast.

Suzuki was planning to strike back with a vengeance, by releasing their version of the Universal Japanese Motorcycle. The company decided that their offering had to have an edge over the competition by being uncontroversial, affordable, quick, having a comprehensive set of accessories and by just being plain good. Engine should be a four-stroke DOHC with good maintenance and reliability characteristics, and it should be trouble free. 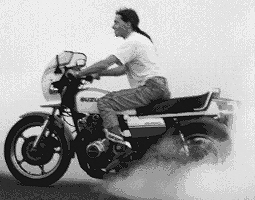 The result was the GS series. First offerings, in 1976, were the GS400 and the GS750, soon to be followed by the GS550 models for affordability and feeding that part of the market in which horsepower was not on the top of the list, and the GS1000 (photo) for sheer muscle.

The bikes came quite complete, most of them having a fuel level indicator (which was rare in those days), and all models sporting a gear indicator (which was unique for the time). They conformed pretty well to the image of the big road-going four. They were fast (usually outperforming the competition) and they were reliable and well-made. In comparison to what was customary in Europe handling was awful to today's standard, but above average for Japanese bikes in those days. Especially the original GS1000 eventually went into history as a dangerous bike at speed, but when compared to Honda's CBX, Kawasaki's Z1300 and Yamaha's XS1100 it was quite manageable -- and a huge lot less heavy as well. Mechanical noise was very low, and the GS engines had what the Germans call "laufkultur". The engine 'hung together' extremely well, and never seemed stressed when asked to deliver.

All this contributed to the final image of the Universal Japanese Motorcycle. The GS series was the quintessence of its generation. And it was the bike with which Suzuki successfully became a member of the Big Four.

Next to that, they also developed a somewhat off-beat line, noted as a derivative of the GS-series. These models were designated with an additional G and were shaft driven. Models included the GS650G, GS850G and GS1000G, and for those lucky bastards in the US, the GS1100G. These models mainly aimed at the sports/touring market.

Suzuki wasn't the first manufacturer to build shaft-driven bikes, but they were the first to get their act together in a big way: the shafties were absolutely right first time. In Europe, the GS850G was gobbled up as quickly as Suzuki could make them and, once equipped with Vetter fairings and panniers, were driven all over the globe without a glitch. The shafties were the first to set the reputation for reliability and unbreakability of the GS-line. One might well say that the GS850G has done a lot for the reputation and the popularity of the GS series in the early eighties. It wasn't the quintessential GS, that will probably have been the GS750, but it was, globally, over time the most popular. 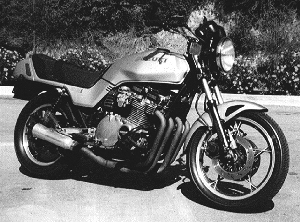 In 1980 it was time to hit back another time. Honda had been introducing new engines with 4 valves per cylinder -- first on the CBX 1000, then on 900 (the Bol d'Or) and 750 models as well. Kawasaki was slow to react to the challenge, but Suzuki decided to equip their air cooled GS engines with 16-valve heads (which they could do, since the GS engine was DOHC in the first place, and the whole power train stood up to higher power levels better than the 8-valve, SOHC Honda's) and a carefully laid out combustion chamber, aiming at excellent delivery throughout the whole rev range as well as a ferocious top end. In Europe these bikes were called GSX, whereas the American market retained the GS designation. The shaft driven bikes never got the new heads, since their primary aim was low maintenance cost and reliability, not sheer power.

The first Honda 16-valvers had their troubles, only to be put right in the CBX550 and CBX750 in 1984. The Suzuki 16-valve machines were virtually trouble-free and stood out as sheer powerhouses at all rev ranges... the GS(X)1100E (photo) went down in the history books as the engine of choice on the dragstrip and in pure musclebikes, since it stood up to extremely high states of tune without blowing its top (or any other part) or doing Kawa-like self destruction acts. Dunstall built a sports bike around the engine, which was long the fastest accelerating production bike ever.

Several other models were derived from the GS concept: there were 2-cylinder models such as the GS450, and 1982 even saw a GSX400F four-cylinder. 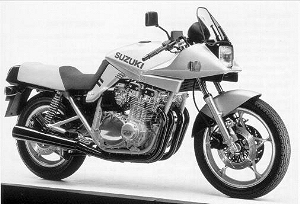 In 1981 Suzuki introduced a few very radically designed bikes around the GS engines: the Katana's, designed by Hans Muth from the German design bureau ran by Jan Fellstrom, which took motorcycle design into the 80's with one big blow. It came in 650, 750 and 1000/1100 (photo) varieties, the 650 being a slightly less radical (shaft driven) model and the others being the most radical Katana's. The Hans Muth drawings served as a template for later designs, from Suzuki as well as from other manufacturers. Take a look at line from the tail through to the front of the tank of the Honda CBX750 and the mid-eighty Kawa GPZ's to see the direct resemblance. This slanting line, though less pronounced, was followed to the early nineties. The original, "true" Katana has gone down in the history books as a real classic and has a line of dedicated followers.

For the mid-eighties, Suzuki finally designed a new engine type, which distinguished itself from the pack in the sense that oil as well as air played an important role in cooling the engine. This engine clearly had different genes, and thus the end of the classic GS had come.

Or so it seemed. But the dedicated followers would not have it... and so, the 850G (and as far as I know also the 1100G) was to be the model that would eventually close the door of the True GS, being in production until 1986. Suzuki had closed production of this model down in 1983... only to reopen it in 1984 because people, especially in Europe, stubbornly kept on asking for the big shafties.

The rules for sports bikes had changed, the sheer muscle bikes were becoming extinct, and the true sports bike took over. But for the tourers, at least the Euro-tourers, things were different. The GS-G's, known as undemanding workhorses, had True Grit (which is the essential characteristic that set the GS series apart from any other bike) and made deceptively good tourers. Suzuki had no alternative for it, Yamaha had initial problems with the XJ900, Honda offered a VF750S which (initially) ate cylinder head parts faster than your wallet could say aaarghhh, and the 'Wing... well, the Wing was a little too much like a Winnebago, in particular to European tastes. Kawa still had nothing that really struck on. And BMW... well, in those days you qualified for a pension just for driving a Bee Em. So the GS shafties did fill a gap. In 1987, the Dutch importer managed to have some GS850G's assembled from spare parts because of the huge demand.

With the descent of the GS850G in 1986, the original GS series had finally disappeared from the catalogs. But it will be some time before they disappear from the face of the earth, mind you!