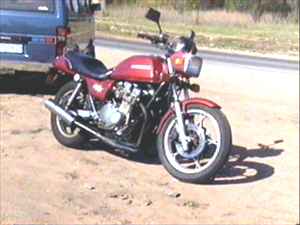 We took time out to revisit one of the old favourites. Suzuki GSX 1100. These bikes have a reputation for being extremely reliable and they responded well to engine tweaks for those speed freaks amongst us.

Come on now, don't be shy. Don't tell me that you didn't put at least a pipe and a set of K&N filters on your bike!

One thing that must be kept in mind is that I am constantly comparing this bike to what we have available today. I know that this is totally unfair but I need a sort of reference for experiences long retired to unused recesses of my memory. 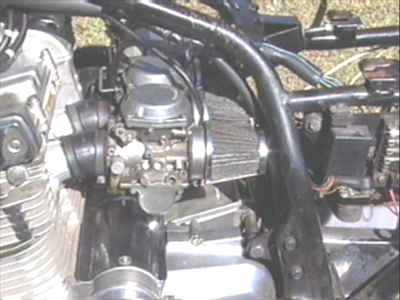 The example that we rode had a set of K&N's and a pipe on. The body work was still standard aside from a cut down seat. Paint work is understandingly not in pristine condition and the instrument panel is starting to show the effects of the harsh African sun after eighteen years.

It still started up on the first prod of the waking up button and proceeded to send out a healthy grumble from the Cowley exhaust. Jeez, we've been spoiled with these newer bikes. They sort of buzz along smoothly, even their growling, aggressive sound is quite subdued when compared to the pre-race rep brigade. Not this baby. The induction noise coupled with the vibrations that were inherent to these machines, said: "Watch out, boy, (I'm sure that a GSX would never say 'dude') I'm a real motorbike, not one of your plastic race reps." Now I can see where those stickers with oblique (and sometimes very direct) references to putting bigger, better and more exciting vibrators between your legs originated.

After years of riding precisely these plastic race reps (and being bitten by them a few times), it was a bit of a culture shock to be instantly transported back to the eighties. I had forgotten the spindly forks, the sit up and beg handlebars, wide comfy seats, longer brake distances and thinner tyres. It's weird but this bike didn't say "speed" it had more the impression of "muscle". When you wound up the revs, it let out a throaty roar whilst gobbling in what seemed to be tons of air through the open filters. It felt exciting and dangerous to ride. The engine is not as free revving as the plastic one's and it almost seems to bellow out it's revs when flirting with the red line.

In those days, speed wobbles were the norm and I was quite surprised when I took the bike up to 180 (with more to come) before it started feeling just a tad jittery. We later discovered that the headstock bearings were loose, so I guess that the old girl still had a couple of wobble free kph's under her belt ... errr......garter. Turning wasn't the nightmare that I thought it would be. Sure it's not the lightest of steerings, but it was much lighter than I thought it would be. The bike is slow to turn in and you do need to put a bit of effort into it to get it pointed in the desired direction. It also seemed to have a tendency to want to run wide and one had to constantly be pulling it down into the required line. Other than that, you could confidently send it through a bend as long as you're fairly smooth with your inputs. This is not a bike where the term "slammed it into the corner" applies. This is more a case of muscling it firmly and smoothly and then powering it through.

The brakes stop you. They aren't very powerful and there is no feel to it. Simple and functional. "Pull the lever and we haul down the speed for you sir." In those days, we apparently had no need for stuff like feel and power. If you tugged the lever and then stopped - your brakes were great. Having said that, I probably take it out of context because they're strong enough to howl the tyres, so they were plenty powerful enough for the tyre technology of the time. 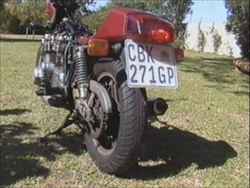 So, in spite of not having ridden one of the newer retro look bikes, I have to question the sense of buying a new retro look when you can get the genuine article second hand. One the other hand, you do get newer brakes, an uprated engine, and in many cases, braced frames for improved handling......oh yeah and a new bike as well. Then again, do the new retro's have the charisma that the genuine articles had?

Lets us suppose that you were in the market for one these muthers - what can you be on the look out for? What were the good things about these bikes? What can I do to make the monster even more monstrous?

These bikes were actually very reliable with very few faults so we had to nit pick slightly.

The GS Resources kindly thank Sport Bike Online from South Africa for their permission to reprint this article.