A primer on GS charging systems

by Peter Huppertz
(with updates by the current editors

This article goes into the theoretical aspects of the charging problems on some Suzuki GS models. It tries (successfully!) to identify the source of the problem, and (inconclusively) the cause as well.

During the time that this piece of prose has been on-line, some questions were asked, from which I learnt a few things:

From this feedback, I compiled some sort of FAQ. It is advised, though, that you consume the primer first, because the theory therein I think is essential for understanding what's in the FAQ, and the answers in the FAQ refer to the article. Even if you are familiar with the concepts, the stuff hereunder will contain information and assumptions which are GS-specific... and if nothing else, you may spot errors and deserve honour and undying gratitude by pointing these out to me!

If you have an item of note...

...that you feel is of value and should be featured for the Stator Pages, simply send Frank an email or or send him a forum Private Message with your idea, hint, etc.. If this is something that may help the cause, we will notify you via email to let you know that we would like to include it on the main website.

Every car and motorbike carries a battery. Such a device comes in handy when electricity is required to drive the ignition and to make light bulbs glow et cetera. Now, as you may know, a charged battery will not remain fully charged when you draw power from it. To prevent the battery from becoming empty, car and b ike designers equip their fruits with contraptions to recharge the b attery while the engine is running. This is commonly known as a charging circuit.

The central part in a charging circuit is an AC Alternator. The alternator consists of a rotor, basically a large hollow magnetic cylinder driven by t he engine's crankshaft, and a stator, which is a series of coils located inside the rotor. As the world turns... eehm, cough, excuse me. As the engine turns, the rotor circulates (usually at crankshaft speed times one, since in most designs it is mounted directly at the side of the crankshaft) around the coils of the stator, which causes said stator to generate an electrical current - in most case AC current, some 75 volts or so. 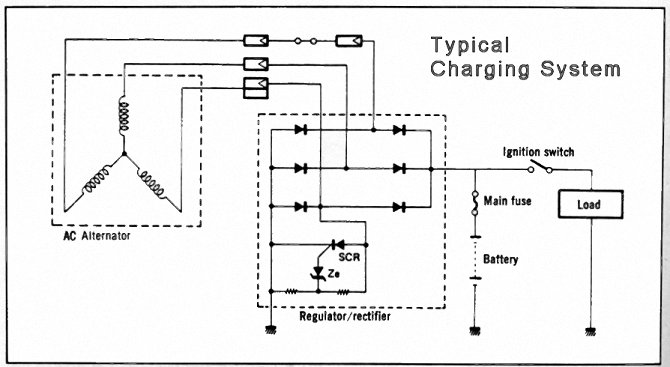 Now, what to do with all this power? The most useful thing I can think of is: shove it into the battery. Lucky for me, automotive designers agree with me, which prevents me from having to recharge my battery at home after every other ride.

Of course, if one would apply all this current unregulated and unrectified to a 12 V DC battery, some mightily funny and interesting natural phenomena could be witnessed. You might want to do this for empirical purposes, but I advise you to pick a battery that is in the winter of its existence anyway. Stand back while the experiment is going on.

If we decide that we don't want this (and you may take it from me that in general we don't, especially when our own cars or bikes are involved), we will have to in some way convert this AC into DC, and regulate the voltage to something exceeding 12V by a reasonable margin, say, somewhere between 13.9 and 14.5 volts.

This is where the regulator/rectifier unit comes in. It converts AC to DC basically by flipping the negative part of the sine wave over to the other side of the X-axis. Ideally, a condenser somewhere will saw off the peaks of the sinuses, making it look more or less like a block wave with the negative parts flipped over to the positive side, and thus we have DC. Furthermore, it regulates the current until a potential of about 14 volts remain. Now this is something we can feed into the battery and lo and behold, our battery is getting a free charge as we ride and ride through the countryside! (believe me, it works in urban areas as well, but that just doesn't have that poetic ring to it).

Of course, at a certain point in time, assuming that electricity generated will exceed consumption at normal cruising speeds, the battery will attain a state at which maximum charge is reached. The relentless feeding of more current into it will be resisted by the battery. Only a small potential difference should remain, which is called trickle charge. The excess energy will be sunk somewhere - as heat. Ideally this will happen in the regulator/rectifier unit, which is busy regulating the current anyway. Therefore it is usually equipped with a heat sink.

Ok, enough theory. Are you still with me?

Now to our particular example, which happens to be my beloved motorcycle, and probably yours as well. In my case, electrical power is generated in three so-called phases. First and second phase are active constantly, and thus the distinction is purely academic for this topic. Now then. Some sly engineer rightly assumed that when the lights are off (in Japan, people seem to ride with the lights off a lot), the consumption of electricity is down a good deal. Apart from the electric starter, the lights are the biggest consumer of electricity you can find on any bike -- other than a Honda Goldwing Interstate GL1500 six cylinder with aftermarket heated seat, heated handlebars, heated footrests, a large stereo, a TV/VCR combo, a minibar, a microwave oven and probably a fuel pump the size and power of your mum's spin-drier. So, contemplated our engineer, if we don't have our lights on, we might as well sink off the current from the third phase right away! And via a wily wiring scheme, that's exactly what happens on my bike.

Silly, one would think, since if we would utilize this third phase, exactly the same thing would happen. The excess energy would be regulated away by the regulator/rectifier and sunk away as well, and if nothing else it would also save some wire. There must be something behind this, we (Theo, a colleague of mine and I) reckoned, as we were contemplating the molten coils of my stator, as well as some diodes in my regulator/rectifier that had suddenly turned into ordinary wires. And indeed there was.

As Ritzo Muntinga of ElectroSport Industries told us: by design, the regulator/rectifier unit does not regulate the third phase! Now, what does this lead to? Anyone who can answer this may stay after class and clean the blackboard... no hands? Okay then. Here goes. Given that we here in Europe have our lights on almost constantly, and I understand you US citizens aren't even able to switch them off, we are using the third phase extensively. Lights on or not, we may safely assume that at normal cruising speeds the electricity generated will still exceed consumption -- except maybe on the previously described Goldwing. But my guess is that on such a bike, switching the light on would not make a measurable impact on electricity consumption). So we end up with a battery filled to the brim, and a regulator/rectifier unit trying to give the battery everything it has from the third phase.

Now then. I am not quite sure about this, so I will have to confirm this with Theo, but my guess is this: the regulator/rectifier unit gives the battery what the battery wants, and REFUSES TO ACCEPT ANYTHING MORE THAN THAT FROM THE GENERATOR! This leaves our generator with the sudden unexpected task of sinking the excess energy into -- somewhere. Our poor stator has no choice than to sink this for a large part into its own coils.

Let me put it this way: don't try this at home. I can imagine that for experimental reasons you might want to overheat a coil, but you would choose one that you wouldn't need once the experiment is over. Certainly you would not choose the coils from the generator of the automotive device that your dad takes out for a spin for work and pleasure, would you?

And to add insult to injury: by virtue of some devious natural law that I don't know the foggiest about (surely Theo will try to explain this to me once again), at the very moment that the stator blows its top, some diodes in the regulator/rectifier unit die a horrible, asphyxiating death. Which leaves you with a bike that don't charge and a projected repair bill of something like $500, excluding labour. Thank you verrry much.

Luckily there is a bike parts shop in the northernmost part of our country who know what's going on -- in fact they started the spark that lead to the abovestanding contemplations, assumptions and conclusions. But they didn't stop there. They also sell a heavily modified regulator/rectifier unit that regulates all three phases and does not do the unnecessary phase shift trick when you flip the light switch. And total costs, including a brand new stator for the generator, amounted to no more than $250.

Some people have resorted to using the regulator/rectifier of a Honda CB750 (the 16-valve model). A caution against this trick seems appropriate, though. I have also seen someone doing the Honda regulator/rectifier trick. However, the heat sink of this unit is quite small, and especially the post-80 GS's, with their beefier alternator, seems to burden the unit a good deal.

In my friend's case, the unit did get terribly hot on longish trips, which in general is not healthy for electronic components. After less than two years, the guy had his unit fried and another stator gone to meet its maker. So, people living in the warmer parts of the world, as well as those who maker longer trips regularly might want to beware when they do this.

One tip: it seems to be possible to extend the life of the stator by keeping the engine oil level topped up religiously! In an effort to circumvent the problem, Suzuki has the stator running in engine oil, in order to try to let the stator keep its cool under all this stress, but it won't prevent a catastrophic meltdown.

I am again a happy man. Anybody interested in an offline battery charger?

Next article: The Stator Papers 2 - FAQ's